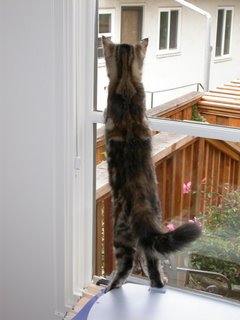 We adopted two beautiful, cute (any other kind?) kittens from the Milo Foundation on Solano Avenue about a month ago.. and it’s been a joy to have them.

Lucy The Cat died unexpectedly about a year ago, and it’s taken us the better part of the year to mourn her.

And so it was time for us to give two babies a new home!

But what to call them?

For weeks.. Number 1 and Number 2… then Carol came up with “Puddy Maximum” and “Puddy Minimus” .. because they both have Maine Coon Cats in them.. and they’ll get big.

But suddenly, one of them revealed her real name!

She jumped on a fence, and after several attempts, climbed to the top!

It was time to put a collar on her.

She got out of the collar in about 2 hours.

Then we put another collar on her.

She got out of that one in even less time.

So I said “This kitten is a real escape artist”…. a veritable Houdini!

And Carol said… not a Houdini… but rather a Poudini!

And so we now have Poudini and Puddy Maximus.

And we BOTH wanted to see “The Illusionist” at one of our local theaters, the Albany Twin Theaters.

We came home, consulted with Poudini, and she gladly gave it a 4 Paw Rating!

Who else to review a movie called “The Illusionist” than Poudini!

I won’t tell you any more, except that if you’re looking for an intelligent, interesting, fun evening at the movies (and also happen to be a Paul Giamatti, Edward Norton, and Philip Glass fan, you’re in for a treat!

Poudini says to see it right away… before it disappears from your neighborhood theater!

Photo Above – Poudini practicing an escape