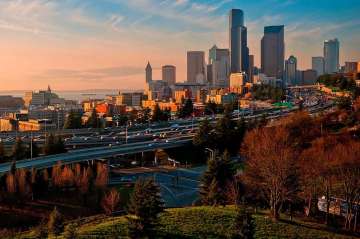 Rockridge and Temescal are two of Oakland’s most vibrant neighborhoods.

Temescal’s a bit more affordable than Rockridge and known for new and trendy restaurants. It’s about equidistant from the Rockridge and MacArthur BART stations and is easily accessed by Highway 24.

There’s easy public transit access to UC Berkeley via AC Transit 51B Bus. San Francisco is less than a half hour away by direct BART trains or casual carpool at Hudson under the overpass. Highway 24 gets you to I-580 and the Bay Bridge, I-980 and I-880 south to Silicon Valley, and east to Walnut Creek.

In an era where so much is digital, I’m delighted that Rockridge has not just one, but two great book stores – Diesel and Pegasus (which has sister stores in Berkeley on Shattuck in downtown Berkeley and Solano in Thousand Oaks)

For reflections of a different sort, walk down Birch Court to visit Saint Albert’s Priory, a house of studies for Dominical friars on a serene, tree filled 5 acre site.

Rockridge BART has a moving memorial at street level – ceramic tiles done in remembrance to people and pets lost in the Oakland Hills firestorm of 1991. Much of Upper Rockridge, between Broadway through Highway 13, was rebuilt after the fire.

Market Hall, to the south of the BART station, reminds me of Montreal’s amazing Atwater Market … or an indoor Parisian Rue Cler. Market Hall has Highwire Coffee Roasters, Market Hall Bakery, The Pasta Shop, flowers, wine, fish, butchers, and produce. Oliveto Cafe and Restaurant is on the corner.

Early one morning Carol and I headed up to Tilden Park to see the moon and planets rise in the east. Afterwards we headed down to the Rockridge Cafe for a full breakfast.

Temescal’s to the south of Rockridge, and west of Oakland’s Piedmont Avenue neighborhood.

Cholita Linda’s Latin food is a favorite of ours; Doña Tomás (Dona Savitsky and Thomas Schnetz) is known for distinctive Mexican cuisine. They also own Tacubaya on 4th Street “la taqueria de doña tomás” and Flora (next to Fauna) is in the old Floral Depot, an extraordinary cobalt blue, silver trimmed art deco gem. Bakesale Betty has a great buttermilk fried chicken and cole slaw sandwich.

Temescal has some venerable institutions … The Kingfish Pub & Cafe is a long-time neighborhood bar … with a jukebox and free popcorn. Hungry? Kingfish doesn’t serve food, but the Red Sea restaurant across the street will deliver. That’s not the only thing to come from across the street – the Kingfish building itself was physically moved from Claremont Avenue to its new current location on Telegraph.

My favorite? Genova Delicatessen & Ravioli! I first discovered Genova when it was in an old brick building, and staffed solely with men wearing white shirts, ties, and crisp aprons … almost like being in Little Italy back-in-The-Bronx!

The old building is still there and Genova moved next door to a much larger space. The staff now reflects the extraordinary diversity of the neighborhood … and they still wear those crisp white aprons.