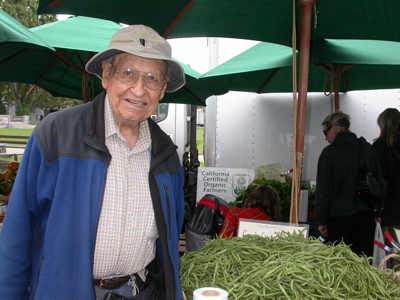 I’d heard the rumors, but was thrilled to find out that I received the 2006 Nobel Prize for Real Estate!

It was awarded for two different discoveries:

Quantum Theory
After a buyer writes an offer on a home, they either get the house… or they don’t get the house – there is no other state

Heisenberg Uncertainty Principle
The act of writing an offer on a home changes the home’s final sales price… even if you’re uncertain as to what the other offers are.

If there are multiple offers on a home, and you write a low priced offer, your probability of getting the home is very low. You affect the outcome, because someone who really wants the home will raise their bid and the home sells for a higher price!

Albert Ghiorso
And Albert Ghiorso above? Albert, one of our 91 year spry neighbors, was co-discoverer of more elements than any other person in the galaxy! Albert’s Wikipedia entry lists the following elements:

Degrees Of Separation
I looked at the San Francisco Chronicle’s list of Bay Area Nobel Prize winners, and realized I was one or two degrees of separation from several…. one neighbor works with a Medicine Award, a client’s father received one… and I went to Bronx Science, Cooper Union, and UMass Amherst at with a real Nobel Prize Recipient… Russell Hulse (is that a one degree of separation?).